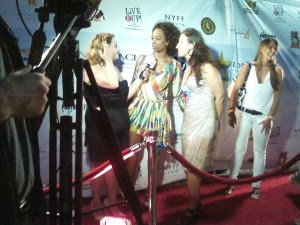 LBIFF Red Carpet Interviews
August 30th, 2012 Long Beach, Long Island, New York – the First Annual International Film Festival begins. A Celebration of Film in the City by the Sea! I was delighted to be asked to attend this year’s Gala event with my lovely wife Maria on the boardwalk & beach outside the Allegria Hotel. Christine Longobardi-Lopez, President – Business Development & Marketing Consultant offered an invite.

I wasn’t exactly sure what to expect until Thursday the 3oth. Coming up the boardwalk at National Blvd. gave way to a vision to that of Access Hollywood. Klieg lights flooded the Red carpet walkway for festival attendees and stars. Donna Drake the evenings MC, welcomed attendees who were decked out to the nines in evening formal wear. Donna worked-the-walkway with her adept interviewing to keep things moving along for the nights awards and film short features.

On the beach; a swath of white screen stretching 25 x 50 feet appeared to be floating on the sea as the ultimate backdrop for the nights chosen short films. Accented by a full Blue-Moon and the groove sounds of Mark Shine’s Reggae playing. The Allegria Hotel generously donated the use of all their lounges that dotted the shoreline with row after row to conjure an almost Drive-In movie nuance!  BTW, it was rather cool to have the film’s sound trax complimented by the surf gently coming in every 20 or so seconds – Nature’s White-Noise.

Hats-Off to Christine and all the crew for capturing the evening’s sizzle, style and community presence. A daunting feat of coordinating that came off without a hitch. The only thing missing maybe, would’ve been one of those pesky off-to-the-side announcer types who do what they do for such events.  Remember Peter Coyote at the Oscars.

Word has it that preparations are already in the works to make next year’s Festival Bigger, Better and Longer (a few days perhaps).
Posted by Tom Clifford VO at 8:49 AM No comments: