We left off here in October's BLOG with a promise from Phenomena Advertising to be considered as voice-over for their new Voyage/Voyage campaign... to promote travel and tourism in the Mid-East regions like Abu Dhabi, the UAE, Lebanon and Jordan. 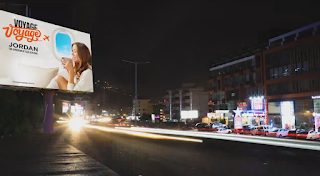 Sure enough PA came calling. They, like so many others these days are trying to gather as many young ears-&-eyeballs for consideration of Mid-East travel as possible. The most recent campaign was for Jordan... a land steeped in history. To some, a trip to Jordan could be a pilgrimage. After all Jordan's famous for its archeological wonderment. Case-in-Point, the Hollywood blockbuster Indiana Jones and the last Crusade features Jordan's, Treasury at Petra. Carved into the side of a sandstone hill, Petra appears in several scenes of the picture.

The movie's fictional Canyon of the Crescent Moon was modeled on the eastern entrance to Petra, a 250-foot-high sandstone slot canyon known as the Siq that leads directly to Al Khazneh (the Treasury).

The above photo depicts Petra on the left with Indy's rendering on the right.

Phenomena Advertising, located in Lebanon have themselves a ton of archaeological wonderment. Working with them is still a bit daunting with 5,600 miles between us. Being seven hours ahead of us here on the east coast you have to get used to early morning starts and early quitting times. Ten O'clock in the morning is five in the afternoon over there. Everyone's flexible. We used a good amount of Skype for direction, pronunciation and tone of voice. For file transfers over 50 & 100 MB's, we used WeTransfer for temp cloud uploads. Here's a Travel Resource link:  Voyage Voyage Dot World


BTW, as a final reference to the film's climactic final scenes, actors Harrison Ford and Sean Connery burst forth from the Siq and walk deep into the labyrinths of the Treasury in their quest to find the Holy Grail.
But, as usual, archaeological fact bowed to Hollywood fiction when Indy came to Petra.
In reality, the Treasury is nothing more than a facade with a relatively small hall once used as a royal tomb. In 1985, the Petra Archaeological Park was declared a UNESCO World Heritage site, and in 2007 it was named one of the new seven wonders of the world.


So fasten your seat-belts, click the 'Play' button below and get ready to take off to adventure!!

Posted by Tom Clifford VO at 11:28 AM No comments: