It's throw-back Thursday...  just in time for Independence Day 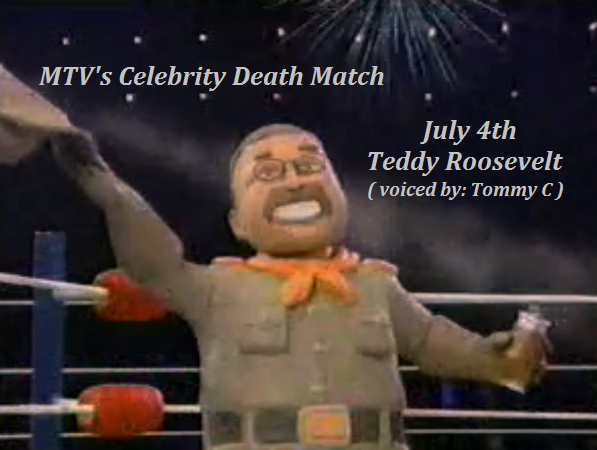 Back in the late 90's we had the good fortune to be cast as Teddy Roosevelt for the MTV series: Celebrity Death Match. We had been cast a lot for the show...ranging from Charlton Heston, Rodney Dangerfield to Nick Nolte. Yet this voice had no real way of being determined...or did it?

At times the actors were given tapes to look at and listen to. And indeed MTV had somehow dug up a sound bite for our 26th president "T.R." Roosevelt Jr. At the time the book, Imperial Cruise hadn't come out portraying Teddy as anything but the manly-man he had been cropped up to be. I had studied the voice and found a few areas I could latch onto and capture Teddy's sound quality, diction and almost the way he carried himself...a strut. And MTV liked it enough to let me strut his stuff for the July 4th Holiday match against; Tricky 'Dick' Nixon,  George 'the ax-man' Washington and 'Honest' Abe Lincoln.