This Election - No One Owns Your Vote

It's been a month full of October surprises. Yet, for some reason, the 'powers that be' are still lookin for an emblematic one. The month started off with presidential Covid-interuptus, segueing into back-to-back rally's immediately afterward. Then there were Presidential & Vice Presidential debates. Where Mike Pence and his fly-on-the-head could prove to be his; Dan Quayle, Howard Dean and let's not forget the Mike Dukakis, moment. And where Donald Trump had his moment with "will the real Abe Lincoln please stand up" in true What's My Line style!

During all this I had received the call to participate in a Lincoln Project opportunity with old friend and movie title sequencer, documentarian, music composer and pretty cool dude: Stefan Nadelman, from “Terminal Bar” fame. He's been blazzin a distinctive trail ever since. Check 'em out at: Tourist Pictures 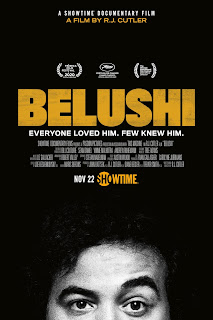 Also, Stefan can be found on the production staff of Showtime’s documentary film on the life of John Belushi this November 22nd. Stefan is their graphics guy and you can catch an eyeful of his work on the trailer at: “BELUSHI”.

This time he wanted me to join forces for something unique as a Trump eye-opener and lend Biden support. He figured with my voice specialties we could come up with that tone of urgency and historical concern. Ah huh. Well, we turned in a few things and then Trump got sick and the Biden team wanted to ease up on any negative marketing. Any submissions otherwise, was seen as a hindrance to the cause. It needed to be seen as an Arsenal of Democracy.

So, why not with a little reality/surreality comparison association. Yeah, that's the ticket...maybe. And why not with a surreal movie character some 40 years ago named: Greg Stillson from the movie  “The Dead Zone” . 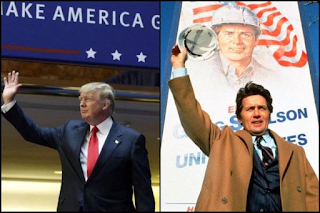 Remember Greg Stillson…let’s at least have some fun while making a point. Hopefully, with an impact that’s right between the eyes with a reality check - that we don’t need any more time to figure out whether it’s life imitating art or the other way around.
We would just like to change the channel, please. Spoiler alert, we’ve already seen the ending.

OK, that takes care of the script. What about voice-over delivery and music to underscore all this and make it demonstrative…but not preachy. Wait-a-minute, why not preachy? Real preachy. And whom better than Walter Cronkite, America’s Most Trusted Voice in TV History to preach some truth.

Walter's sound-a-like voice was put alongside a music bed of Lesley Gore’s “You Don’t Own Me”. Gives the medium and message a little more impact. Maybe it’ll reach out to those suburban housewives Trump wants to carry in his pocket like so many nickles & dimes. Perhaps even gesturing a nod to the nomination and appointment over Amy Coney Bartlett, as Supreme Court Justice. Or to anyone who thinks their vote is owned & counted by none other than themselves...Electoral College notwithstanding.

Check out the preliminary work-in-progress video. 60 seconds of slide graphic dissolves hoping to entertain while making a point with a bit of parody and a tad of tongue and cheekiness.

Posted by Tom Clifford VO at 6:00 AM No comments: