It's time for an IMDb update to the P-A-S-T...and Present

With the SEO garnered from IMDb's social presence these days, their site is reason enough to treat membership with the respect it deserves. With a 30% discount to members of SAG/AFTRA, there's no better time to put together a Credits List on IMDb. Am looking forward to posting some Family Guy credits soon to follow.


I've always been a hoarder of stuff, especially when it came to "the work".
It's a new year and it's high-time to put the 'work' in some sort of order. Man, and it's a job!
I mean, yes I have the stuff needed...but, to be able to put my hands on it and have it act as an archive document...Geez, I wasn't so sure. Half the battle is finding the doc's and then trying to make sense of it to be used as proof. Sometimes, it's not just a matter of having a copy of the script or even a video copy of a show with actor credits at the end. Actual script numbers and air dates are essentials. So, I had to dig in certain instances. Also, IMDb's 'help' section can be a bit of a learning curve. But, there are people on the other side of an 'auto response' email where I received one-on-one assistance.

So, between getting work and finding the 'work', I have finally gotten my soap opera credits (almost all) listed on that section of IMDb. I had played many characters that you don't see, just hear on the ABC DayTime show "Loving" in the 1990's. And had a recurring role as:

'Sturgeon' the doorman (heard, not seen). Did about 20 episodes...including, Motel operator, Jack's voice, taxi dispatcher, car radio announcer and grunting as King Kong! BTW, this was the only comic relief character on DayTime soap opera-dum at the time! IMDb only listed "Jack's voice" so far, but the links there to get the complete list. 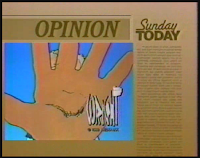 When I can get my head above water from my incessant (he he) work-load, will take a stab at getting the credits for NBC Sunday Today's (Political Cartoons) posted. They include
imitation voicing to the likes of: Oliphant, Peters, Zepp, Wright, Marlette, Auth and Gahan Wilson to name a few.

Then, it's on to getting the -
MTV's Celebrity Death Matches
listed. Here's 'The Donald' I did
against Don King.