The Week Of - has Netflix Premiere.

The movie is about the parents of an engaged couple who are in the final week of preparations for their wedding. Despite their differences, the two clans surprisingly get along, all while witnessing the drama and chaos unfolding between Rock and Sandler. 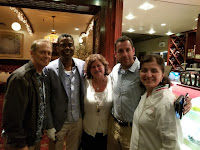 It was in late July of 2017 that the movie crew for "The Week Of " came into our fair town as they've been oft to do these days. Check it Out. That's Steve Buscemi with Chris & Adam at one of our classic Italian restaurants in town where they finished for the week. It's Steve's 11th pairing with Adam. Dare we say a charter member of Adam's posse?

Here's a link to the Netflix Trailer:


Shortly afterward, we had another film crew set up here to film scenes of - SyFy's 'Happy" with Patton Oswalt. No, he wasn't on set as the character is pretty much the disembodied voice of Patton, as the rest of him...a blue unicorned-horse w/wings, is compliments of - CGI. And at years beginning, we had Killer Films come in for several days in February and shoot scenes for the film "Vox Lux" with Natalie Portman, who's also Exec. Prod'r. Jude Law, Jennifer Jason Leigh and Raffey Cassidy share starring roles. The story-line highlights the highs & lows of pop star "Celeste's" 15-year career.

Going back to The Week Of - just realized that Robert Smigel is the director and is co-writer on that with Adam Sandler. Robert is also represented by the same casting director as - Our Cartoon President, who I had pitched last month on the political/celeb voices front. They have a steady troupe, but wanted to be considered for when & if their 'regularly' scheduled talent may not be! She also represents: Triumph (TICDog)...AKA Robert Smigel. I had emailed her that Stefan Nadelman worked with Robert on an SNL skit. Talk about being connected.

Now, all I have to do is work that into my next hello and somehow get on the 'who-ya-gonna-call' list for when Reagan's ghost needs to be summoned up!