ALL HELL WILL BREAK LOOSE...
this year at The Most Haunted Mansion in the City of NOLA… The Mortuary!     Or at least that's what the latest video headline Infer'nos!

But, in the real world it's a bit worse. As hurricane Ida (a category 4 storm) comes barreling up from the Gulf Coast towards a vulnerable NOLA, already dealing with a set back from a storm of new patients flooding the hospitals from COVID-19-DELTA-VARIANT breakthrough cases. This was startin to look like a sign that things were gettin Biblical. One has to wonder how much one part of the country can take. All being accented by the fact that today marks 16 years to the date that hurricane Katrina hit Louisiana. 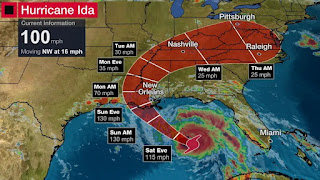 That we're voicing any video promotions at all, has been resting on unsteady COVID-19 guidelines that at present have just started to allow venues like the Mortuary to operate...even if barley.

The Inferno attraction is where visitors pass through the Mortuary haunted house with the effect of the house burning. We are tasked with igniting Inferno's motto: Burn..Baby...Burn.

The commercials are being co-sponsored by Fanta and Barq's beverages and feature QR code interaction with discount tickets and contest platforms. So, we're pushing for a resilient city ready to snap-back to relative normal. 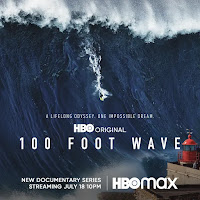 Seguing into what's appearing more and more n-o-r-m-a-l these days is Stefan Nadelman's imaging credits he's chalking-up all over town. Guess who's doin the series visual effects for the - HBO/MAX series; 100 Foot Wave?

And Stefan's, title sequence animator on the Tv Mini-Series; Into the Storm. Hard to figure it's going on 20 years since voicing on his Terminal Bar. But it's pretty cool seeing him in the thick of it making a name etching his technique.

Due to power outages and in general, system-wide breakdowns within NOLA, we have yet to access the completed Halloween videos. So, until we get the agency finals we put together (below) a slide-show version of The Mortuary Inferno spots featuring the actual Vo and music mix audio track.

There's a lot of tongue-in-cheek goin on in these spots and hopefully not too scary for the younger people. After all, with event titles like "Santa's Psycho Asylum", it shouldn't be taken all that seriously.

Posted by Tom Clifford VO at 7:21 PM No comments: