Fertile Crescent gets a Voice with TC & Company

The agency wanted to project an earthy organic voice delivery. And since the Crescent is around the corner from where life began on earth, we crafted a similar sounding Peter Thomas persona ala his: The Triumph of Man delivery he did for the Travelers Insurance exhibit at the 1964 -1965 New York World's Fair.

The Bridge of Tomorrow  (project title) centers around the Ehden & Quadisha Valleys in Lebanon. Agriculture with its crop wild relatives originated 12,000 years ago in the Fertile Crescent and expanded northward from the Mediterranean to Central Europe during the sixth millennium BC.

Ecosystems like here in the Fertile Crescent consist of many hot spots of diversity as in Europe where genetic multiples of wild crop relatives, forest tree species and local breeds can co-exist. My job was to raise awareness of whole ecosystems facing new challenges. There's some urgency connected to all this as climate change and migration of people out of rural areas could genetically alter the diversity they contain. We tried to express that urgency by sounding genuinely concerned and a little bit awed by it all. Particularly with lines like: Because once a genetic resource is lost...it's lost forever.

They laced epic shots of the countryside along with the vo and on-the-ground voices of people remarking about the landscape variety. The Ehden Nature Reserve has the highest tree range in Lebanon. Landscape diversity allows the survival of species like; pine, fir, cedars and junipers. 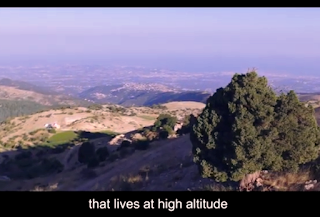 This valley acted as a refuge during glacial cycles. Some species having high genetic diversity adapt to changing ecological conditions. If managed as a whole ecosystem, all those valuable genetic resources of crop wild relatives, animals and forest trees, can be effectively preserved.

The Bridge of Tomorrow is a pretty sizeable docu-something-or-another coming in at: thirteen and half minutes in length ...And I actually get an end credit.

This year marks the 28th Annual Screen Actors Guild Awards. The DVD's, online screening links and e-Movie Cash (for downloadable movie theater certificates) have been sent out. On behalf of the academy we have cast our votes and the results are to be broadcast, Sunday night on TBS & TNT respectively at: 8:00 ET - 5:00 PT.