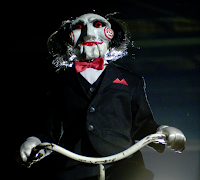 The Creep Show started in 2007, quite by accident...as our 15 year anniversary begins. The outfit responsible for it was called - Elswarro Films. Elswarro specialized in haunt industry short films and advertisements. Jason Swarr, head ghoul filmmaker extraordinaire reached-out to me and asked if I could create a Creepy-Guy voice based on the 2004 movie 'Saw'. They wanted that same eerie sound to that of the movie's protagonist JigSaw, characterized by Tobin Bell. Jason had a compendium of clients throughout the country that needed representation. He supplied them with custom videos from various templates, custom voiceovers & music. 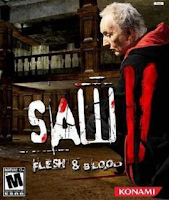 I remember being surprised at who was behind the voice of Jigsaw. Tobin plays that intense off-putting heavy so well in such flicks as 'The Firm', 'Sandman' and 'The X-Files'. Now he's got a completely new career as the demented voice of a psycho-killer. His latest involvement is the Ghostkiller. And he's said to be just as creepy as in the Saw's franchise. To get that creepy crypt keeper voice style I pretended as though I was between two slabs of concrete and every breath was so labored just to say basic phrases. Using that limitation together with some demonic conjuring we came up with a pretty scary likeness.
That being accomplished and with a client list that kept building on top of polished production content... all was right in The Haunt World. The Creepy-Guy voice evolved into a high energy pitchman. Then, Jason confided that he wanted to stretch his creative senses and go into feature films. The great guy that he is, left me all his contacts and gave his blessing to go forth and multiply.

Fast forward fifteen years into the future and I've had some very good luck. Been able to maintain a presence throughout the country providing all sorts of voice characterizations as far west as Arizona & Texas and south to New Orleans, LA. and up to New Hampshire.

Year after year working regularly as the Creepy-Guy Voice, we were able to pitch all sorts of voices for other areas of client holdings; Escapes Rooms, In Line presentations, TV & Radio even developing animatronic voices to cater to clients One-Stop shop for all their attraction goals. Here's how it all started with Arizona's Original Scream Park for their: ASP - Applegate Asylum 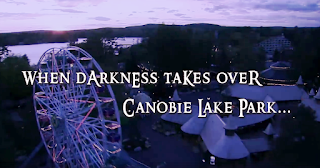 Take a look at what we're doing for Canobie Lake Park's ScreeemFest:


They have a regular theme park going throughout the year and do it up B-I-G for the Halloween Season, particularly this year since it's their 120th year Anniversary. They feature live bands, side shows and Critter's live shows for the little guys... and for Mom's & Dad's.

The Kidz Zone is where younger kids have fun at the Scout Island Halloween festival in NOLA. We're featured as the spaced-out MC Host character in the 'Boogie Spooktakular', an animated cartoon musical adventure! A spectacle of fun for the whole family and kid-centric with a cast of characters that inspire kids to have sing-a-longs and create their own fun amidst a safe scare-free environment. For the MC voice - think a-bit-daffy with a dash of Pee Wee and a pinch of surfer-dude wonderment and Voila! Kids are introduced to a silly bunch of characters like: Mumzy, Wolfie & Helga. They spook-up that Halloween spirit and teach addictive moves to boogie to, giving kids a chance to express themselves with other kids while having fun.                             Check it out at: Boogie Spooktakular