And hosted by Homa Amid

Sima Amid Wewetzer, a modern media artist who's new style of 'Abstract Transitionalism' is a unique technique that features exotic and effervescent colors as well as their natural qualities.

Homa Amid, who I met on the Keller Williams/Vincent Smith School event back in May, happens to have a very creative sister (Sima) who's an artist. Mildred Tassone, asked me to come on-board with some voice & production work for a promo of Sima's art exhibit over at - Keller Williams Realty in Great Neck, N.Y.


Posted by Tom Clifford VO at 8:15 AM No comments: 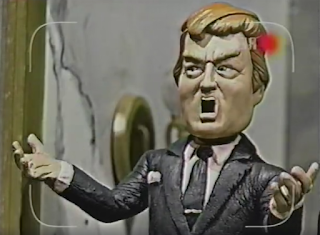 The ongoing hoopla with Fox New's presidential debate moderator, Megyn  Kelly and "The Donald" has his poll ratings lifting upwards around the country. This is not the first time Trump has gone toe-to-toe with a celebrity counter-part. 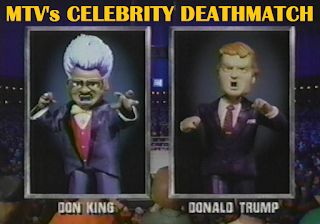 Back in the 1990's I was fortunate enough to be a regular on MTV's Celebrity DeathMatch animated Claymation series. The show was a comedy that pitted the days Celebrity's against each other in a ring and had them fight it out to the d-e-a-t-h of one of 'em...sometimes both were squished, stabbed, bludgeoned, shot, or any other manner of outlandish demise. It was pretty popular at the time and is still a favorite among today's young set. Figured why not dip into the archives for a little Throw-Back Thursday with the possible caveat of having Megyn & "The Donald" duke-it-out in todays ring of public opinion!

I do a pretty convincing Trump "You're Fired", but hardly 'dead-on' when it came to consistency. Back then MTV had actors audition for the parts over the phone. Occasionally, there'd be a frenetic call for an additional voice after a voice session in the Studio. I had just finished with Sammo Hung and was asked if I did Trump. I gave some good "u'r Fired's" and the rest was so-so I thought. In cases like this, if they wound up using the voice you'd get a call from your agent. The call came in...Check please. On my next booking with them I learned from the director that they chose to use my rendition of Trump not so much because of its 'dead-on' qualities, but because it had the right cantor and pacing that closely mimicked Trump's.