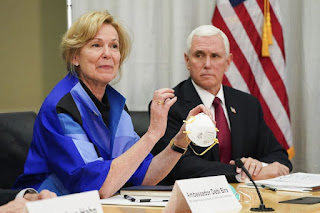 Just when you thought the C-One-Niner pandemic was headin for the last wound-up...it's becoming clear that with more and more state re-openings, a resurgence of outbreaks are flaring up around the country. This seems to be in large part a result of not having any federal or national plan in effect to reopen in concert or with any coherent standard of reopening protocol. Not to mention, the apparent partisan splintering with mask-wearing as one of the factors in virus transmission.

I know it ain't just me, 'cause according to 100 year old pictures of the Spanish Flu...people are wearing protective masks even then to insulate themselves from the infection. So why wouldn't it be a No-Brainer for our politicians to wear-a-mask and lead by example to do the same. Strategists say - it's because they ain't leading! I thought the object of the game was to get back to normal...the new normal if that's the case. Get back to work. Put partisan politics on the back burner, at least temporarily, while the business at hand can begin. Though lately and keeping the aforementioned in mind, it's by no means only one party or candidate's supporters who are failing to respect appropriate mask-wearing norms and mandates.

Flattening the curve and thinking up new & improved ways to do so should be the order of the day or so it should seem for; An Early Clue to a New Direction!

I'll say one thing, I'm grateful to be healthy, along with the fam and the overall lot of us. We're safe and secure and hopeful. Sure, working regular would be grand and oh, those terrible, awful, unsightly masks (gee willikers). But, it's all relative, ain't it. Just asked some folks Beyond-the-Pond what's been shakin over there. They're pretty dire. Things are getting scarce. I'll say a prayer that maybe an aids package from our nation will make its way to our ally.


Posted by Tom Clifford VO at 8:32 PM No comments: