In another life TC & Co. was talent booking...some Highfalutin's on Occasion

It was back in the 80's when we were with Marty Ingels of Ingels Inc. - Celebrity Contact Service.

Guess you could say we were making our bones as Marty's East Coast agent and developed a rapport with ad agencies here in the east. I had done an interview with George (WTC climber 5/26/77) shortly after the WTC climb and got along well enough to be friendly. I had mentioned to him my connection with Marty and he introduced me to Steve Lefkowitz, an agent over at N.S Beinstock, a sports talent agency at the time. Steve took me under his wing and generously shared his know-how of the business...and most important - how to work the phones if you couldn't be there in person. We were rife for new business, plus I was still running on the momentum of booking George on ABC's Super-Star Show a few months earlier in June. It was a lot of fun to coordinate the booking, rates, travel and smoothing out any edges or bumps to make sure everyone was relatively happy.

We passed the notion by George to be a guest on the Letterman Show and he was psyched. George actually met David on the Tonight Show while Dave was subbing for Johnny Carson. Dave's Show was a morning show back in the 1980's and l-i-v-e. So, the challenge was ON. Time to see if we can cast a little interest for George in Letterman's casting departments' direction and see if we can get a nibble. With some tenacity and that never-take-no-for-an-answer swagger I garnered from Steve, I had piqued the interests of David's talent coordinator for George being cast as a guest. She called in late August to say they wanted George on the show in mid-September. It would mark David's 65th show ending a 13 week cycle (or Final Show). 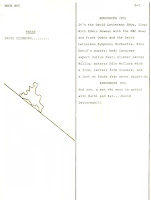 If you can believe it, George was actually canceled for that show while he was still in the air from California to New York a few days before going live. You didn't want to be eavesdropping on that call. But we convinced their talent coordinator to continue with George as planned. It goes without saying, that if there were Air-Phones on board at the time, George probably would've been cut from the show. My objection centered on him being told to go back to where he came from as soon as the wheels touched down in N.Y.

The show was slated to start at 10:00 AM and we arrived at the studio at 7:00 AM for rehearsals and timings. Originally scripted as the Show's opening scene (left script) was to have David (alone) climb up a 45 degree angle and introduce George as part of the guest list. 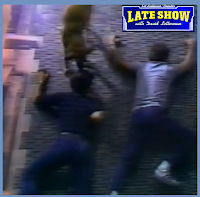 Yet, after a few rehearsal takes, it was falling flat. I was spit-balling a few ideas with the scenic designer that if they had some big-ass background scenes of a brick building then..."Sure we do", she said. We're NBC, we've got that stuff laying around all over. WoW, that's great. Then, I proffered placing George & Dave on the floor on top of the building graphic lying on their stomach's. Cue some SFX of street noises, coupled with some fans blasting away at the two of them to resemble swirling wind and place a camera over-head to take in the effect that they're scaling the side of let's say - the RCA building. Voila! You've got the makings for a premise that's believable. Watch as they play it up until David's best bud, Stan trots in for the reveal!

The scenic designer loved it. "Hey, what's not to love", she said. It was on the cuff, the props were in storage and it was one more thing she didn't have to worry about. Plus, it turned out to be a great bit. The early Batman show used a facsimile of it every week to introduce cameo celebs. And I learned early on that it's always about what's best for the show...and no gloating allowed.

Posted by Tom Clifford VO at 6:23 AM No comments: