Word's out about Tommy 'C' over at Futurama-App's 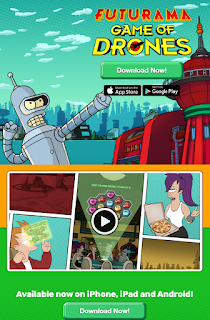 Had a nice surprise during the week with a telephone call from 'Casting' over at Futurama.
They gave me a shot at layin down some lines of BENDER for their mobile app. Talk about being on-call all the time...and being able to produce.


Well, it was quite a bit after hours when the call came on Wed. You know, the middle of the week and all. Mighta had a therapeutical cocktail or two in line with Mid-Week 'Bender-ing'. So, I was primed and ready-to-go in character, as it were.

I was included with some mighty fine actors and the pay-off was generous. The call was for 'Dead-On' and due ASAP. Files went back & forth. A request for another batch was recorded. Even threw in a safety. We'll have to let the files speak for themselves and see what develops. Film at 11:00.