AC Holding chooses +Tom Clifford, VoiceOver & Creative Services as the Nano-Tech voice to their video for world-wide reach of services.

Began in 1979, AC Holding is a privately held family business with a diversified group of companies anchored on trading, distribution and new business opportunities.

Plan-A Advertising had a vision of their own of how to break through the clutter with the diverse companies under the AC Holding banner. All state-of-the-art in their own right, Plan-A wanted a theme that revolved around AC's present technology and how to be empowered by it. As they like to remind viewers -The future doesn't wait for anyone!


They wanted a voice to complement the story-board that focused on the high-tech mechanics of AC's businesses (with frames that cotton to the movie - Minority Report). The video produced by Plan-A Advertising  makes us feel that we're in a Worlds Fair exhibit depicting what it could be like now and not just in the not-so-distant future.

We didn't think the voice should be preachy or trumpeting what the future holds for us. So, thinking maybe that little-sound-in-the-back-of-your-head effect could be useful, we decided on something that said, this might be what the future would sound like. Having always been a fan of Peter Thomas, (in particular his voice-over on the Traveler's Exhibit at the 1964 Worlds Fair) we continued that retro dynamic with special effects on the ACH voice. The sound is EQ'd to that of a low quality head-set. Textured, so sharp, that it almost hurts your ears. For lack of a better term, we coined it; the Nano-Tech effect. Very grateful to the folks at Plan-A Advertising for letting me in on this one. It was nice to be able to stretch some creative juices. Nadiya, a new member of the 'Team' that I hadn't worked with before, was terrific with conveying vividly the essence of the project that gave me a tangible point of entry. And that's a big factor in this business. Direction is everything. I feel like I'm really a part of something with this one.


Posted by Tom Clifford VO at 4:55 AM No comments:

Leaned a new one about the Haunt Industry...

Seems the rage around the Haunts is - Escape Rooms! This is where you pay for the real life sensation of you and your team being locked in a room with the task to escape before the time runs out. Usually 60 minutes. You begin by solving puzzles, uncovering clues, deciphering riddles and discover hidden keys to unlock the door to freedom. All with the satisfaction that your skills set you free!

The Mortuary Haunted Mansion in New Orleans wasted no time in putting together a complete package for it's Escape venue - Mystere Escape Rooms. 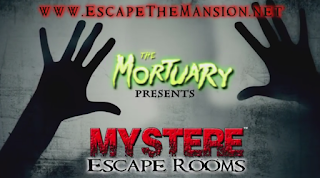 There are Five Rooms of the Mystere and all five need a different voice to introduce their various aspects, ratings and skill level difficulties to the public. From Karloff's voice to a scaly-wag pirate, these rooms come alive with distinction and engage event seekers. 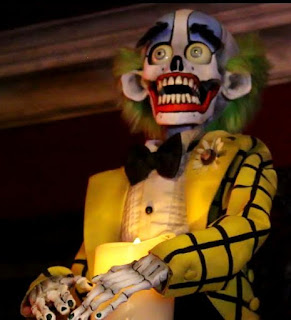 Wrapping it all together as carnaval ringmaster is MORTO the puppet clue-master. He's a wise-craker.

He'll be showing up on Youtube soon enough...with links.