Got a call from the folks at Phenomena Advertising for an international client PromoFix, a branding company. This takes the count to four agencies that have used our services thanks to Plan-A Advertising. The people over at Phenomena are gearing-up to reach a greater international audience. Consequently, there's need for  North American sounding voice-overs in their media. It's quite a distance (5,600 miles) so wanted to give it all I got...and be g-o-o-d. They wanted an authoritative, confident and middle-aged sound to market a shoestring amount of copy (36 words). So, the pressure was ON to make every word count and do something unique, or as the 'Thing' would say...
it's 'Branding' time!

At some point Skype will be charging for what we now get for free. We used it exclusively to communicate not just for recordings but to take direction and bounce a few pronunciations back & forth. I try and keep the recording platform on a separate computer. Then, I will Skype with a laptop as the internet connection - set for 'phone' . It's more stable than if we added video to the mix and no one has to feel like they need to dress up (Make Up) for a creative or recording session. Add-on desktop hardware & programs allow for an optical digital AD/DA interface of the mic & mixing board for true digital recordings. We can feed that signal directly into the laptops input feed for the client's immediate retrieval. Or use a cloud app (Wetransfer) to upload the session for client retrieval as an Aiff file. As of this writing we received another assignment for a presentation video voice-over called - Voyage..Voyage. There, we had to attraper with French!

Promofix had established itself in 2005 as a leading media representative and is the digital media arm of JGROUP. They have since expanded by building its core business around the media industry. They represent today some of the most prominent and influential digital clients such as: SNAPCHAT, SHAZAM, DV.DSP powered by BUCKSENSE and SIZMEK.
These folks are the are the real-deal - bringing your brand to market, revving up a good strategy and then implementing it with all the Prime & Peripheral media...social and otherwise.

Type William Gottlieb into Wikipedia and you'll be featured to the life of a newspaper columnist, film strip producer and a guy who took up photography because his job was on the line if he didn't. 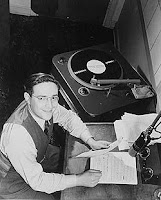 But what you won't find, is anything that really defines him as an eclectic fly-on-the-wall shutter bug to the jazz world...who's singular captures of jazz greats are among some of the most widely reproduced images of the jazz era.

When we had the opportunity to speak with Mr. Gottlieb, he thrilled us with mounds of anecdotes & stories about his close association with the Jazz world. They trusted Bill and he was allowed to be that "fly-on-the-wall" to get just the right shot. Notably, with his prowess for capturing the effervescence of the performers intimate golden moments. 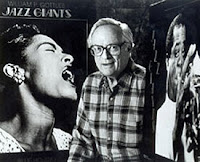 When Bill spoke about some of his photos that were actually used as album covers it was astounding to learn that he was the guy who took those very recognizable 'shots'.

''I learned to shoot very carefully,'' he said. ''I knew the music. I knew the musicians. I knew in advance when the right moment would arrive. It was purposeful shooting.''

Bill went on about how at first he wasn't paid for some of his now-celebrated photographs of the great names of jazz. He took only a few pictures at a time because he couldn't afford flashbulbs. And then Mr Gottlieb walked away from the jazz scene and had a successful career writing children's books and filmstrips. Thirty years had come & gone and part of Bill's former artistic-self caught up with him after the owner of the Strand bookstore persuaded him to publish a book of his jazz photos. The result was ''The Golden Age of Jazz'' (1979).