It's that time again in the Haunt Industry. Actually, the season has lengthened by about 2 weeks in the last few years. Originally, we'd start voice recording for the Halloween Season in Mid September. We started this season in late July with the Mortuary's newest event attraction - "Strikes 12"
Cue: The Creepy-Guy voice: As darkness spreads across the land - Lawlessness reigns. Chaos runs amok.
And at the heart of it lies...The Mortuary.

As the clock strikes 12, we hear that murder becomes legal! People need a release... a page from the PURGE films franchise.

Here are the Rules for Survival; At Midnight, The Mortuary gives the average person the opportunity to vent their frustrations by hunting their fellow man. When you and your friends enter The Mortuary, look to your left… then look to your right…

Do you really know who your friends are? Someone isn’t who they pretend to be.
Did your friends invite you to go to The Mortuary to have a good time or were their intentions more sinister than you could have ever imagined? Oh NOOoooooooo!

We continue with; Will you be an unknowing participant in a beat-the-clock to survive death game? Thrill-killers are amongst you. You ARE the hunted. Oh, My - Just Horror-able isn't IT! 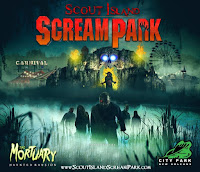 Also, New for the Mortuary is Scout Island Scream Park coming to New Orleans City Park. Fun for the entire family with Scare Free Kid Zones and Zombie Outbreak Battlefield  - a live combat Zombie survival experience that thrusts guests into an apocalyptic world with military style Laser-Tag weapons. Guests get a chance to shoot their way with video game-like infrared bolts of light on a “fight or die” survival mission through the living-dead. Oh Goodness... I'm hoping they have a few exploding Zombies along the way for that added gooey splatter of Zombie protoplasm!

Here's something you may not have known about the songwriter Paul Vance, who co-wrote the 1960 pop hit “Itsy Bitsy Teenie Weenie Yellow Polka Dot Bikini” which, BTW appeared in "Love Actually" and by IMDb count 30 other movies and commercials.

Paul was stunned to learn that another person was claiming authorship of the song. But, only after the impersonator had died did he and the world get wind of it. 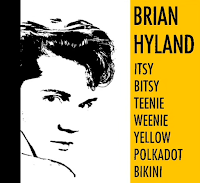 It was the result of a not so Teenie Winnie story the Associated Press ran about the death of Paul Vance on Sept. 6, 2006, citing his wife as its primary source.
The actual obituary, was for Paul Van Valkenburgh, a native of New Milford, Conn. It was reported that Mr. Van Valkenburgh wrote the song under the name Paul Vance.
The 'real' Mr. Vance, who was 76 at the time and had moved from Long Island to Coral Springs, Fla., said he was “kind of shook up” over reports of his demise. Mr. Vance also wrote the song "Catch a Falling Star" that was made famous by Perry Como.

Itsy Bitsy... co-written by Lee Pockriss, was recorded by the teenage heartthrob Brian Hyland and rose to No. 1 on the Billboard chart in 1960. It has survived as a novelty single and was rerecorded by the eclectic rock act Devo for the soundtrack to the film “Revenge of the Nerds II.”

John Castaldo, chief financial officer of the Music Sales Corporation, the publisher representing Mr. Vance, said there was no question that the living Paul Vance was the co-writer of the tune, and added that his company had been collecting royalties for Mr. Vance since at least the late 1980’s.

Mr. Vance said he was particularly concerned that companies outside the United States who license his songs would be confused by the reports and would not make payments. “Believe me, if they think you’re dead, they ain’t going to send the money,” he said.

As it was explained to us first hand by Paul himself, he's made an enormous sum every year from the royalty usage of - IBTWYPB. When we met him, it was under entirely incongruous circumstances to the music business when he just so happened to divulge who he was and that he was responsible for writing or co-writing various hit tunes. It struck us as a bit unbelievable.

Here's Paul talking about his early days (in a Utube video) as a junk yard owner (get-the-picture) and at the same time...a songwriter of: Itsy Bitsy & Catch a Falling Star. The 'real' down-to-earth character of Paul shines thru like a glimmering light on a Rainy Day...albeit a bitzy rough around the edges!

Posted by Tom Clifford VO at 3:02 AM No comments: