Our latest assignment, felt a little like Mysteries of the Museum all over again. At least this time, let it not cost us anything to watch.

So, here's the skinny - While viewing on 'The Roku' this past weekend, we happened upon the HBO/Max series "The Story of Late Night", being fronted by CNN. It's a bibliography of sorts about the after-prime-time niche of Late/Night TV and its hosts. Apart from that, it's another visit down 'Memory Lane' of the rich & famous & powerful in that industry and what it's like from the inside. Though, it was entertaining.

That's Entertaining - was more like it, because the show featured a cool clip of George (WTC) Willig and Dave Letterman doing a skit from Dave's morning show. I was agent'ing back in 1980 and had booked George on the show. I remember spitballing the idea off the scenic designer to use an overhead shot of George & Dave on top of a blow up picture of a brick wall (placed on the floor)... then have Stan-the-canine do his walk-on reveal thing. She went with it!

But, it caught us completely off guard to see George & Dave's wall bit at the very last 60 seconds of Season 1, Episode 2. Even more cool and surprising is that out of all the shows to highlight, this be a Top 10-er. Hard to believe, got a chance on SNL & George was actually canceled for that show while in the air to N.Y. Check it out 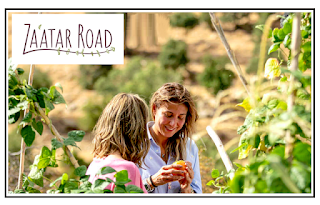 Back in the real world of voice-overs we've had the good favor to be cast as vo to introduce the founder of Za’atar Road to the world for a video promo web-opener. ZR is a marketplace exclusively sourcing unique products from the Levant.

Born in the mountains of Lebanon, Maya Hachem has always been an advocate for her homeland and its people. After emigrating to Boston, she saw the opportunity to help sustain the storied artisanal heritage of the Levant that connects buyers with the goods around the world.

What we tried to convey in the voice-over was the emotional aspect of the region and it's artisans. The region is rife with heritage and customs...why not create a path to connect them with the world. The inspirational music track helped with setting the mood and tone for a laid back but inspired voice-over. Hopefully, we added to the movement.  And so: Za'atar Road was Born

is the realization of Maya’s mission to improve lives. A long time in the designing, they are so thrilled they can officially launch ZR's online marketplace. With a direct link to the website you can check out the floating voice-over gizmo for Za'atar Road ...connecting Levantine farmers and artisans with North American consumers...