Escape rooms are taking the country by storm. The Mystere Escape Rooms are Year-Round and are live-action team-based where players discover clues, solve puzzles, and accomplish tasks in order to escape from the room(s) in 60 minutes.
Just did two radio spots for the Mystere folks in NOLA and the demand is for more...they already have a bunch!
Up to 12 participants per themed adventure including a Treasure Hunt Pirate Adventure, an “Indiana Jones” type adventure called The Game Room, capture a Poltergeist in The Ghost Lab, or escape from a “live” zombie in the Embalming Room. The question is whether you can beat the clock? It may be the most intense hour you and your posse will ever experience. Tick, Tock, Tick, Tock… EscapeTheMansion.net 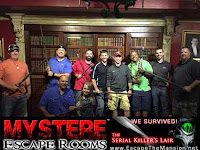 Playing on Social Media with the ubiquitous need to display everyone's activities to the world is another avenue most escape rooms follow. What better way than by capturing the moment with a 'group-photo' for posterity. Claiming success can be a badge of honor in some of these circles. So, imagination has no limits with as many features to provide all the ingredients for celebrations! Targeting private parties complete with catering, entertainment, and the creatures of the night pays off well! PartyVenuesNewOrleans.com

Around these parts of Long Island, N.Y., you can Escape in a Cool-ass..Big-ass Bus. Or L.I.'s *NEW* mobile (multi-concept) escape room...'cause it's the perfect form of entertainment for your Long Island event. They bring their #1-rated escape room challenge to your choice of location – for hours of on-site fun! Of course they offer all kinds of packages at all sorts of budgets with events that have multiple rounds for all guests to have a chance to play. The ride that travels to the burbs. 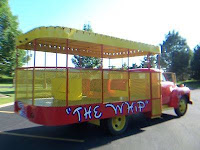 Or a modern day version of the W-H-I-P ride that would make the rounds of neighborhoods of yore. It was basically about 6 rusty barrel seats that were crunched on the back of a truck. They were connected with a chain on a track that would go around in a circle. At one point it would heave (whip) a row of seats into the stratosphere with a wall of steal mesh to prevent kids from falling out onto the street...or chopped up in the mechanism. One of those 'when we were kids' stories.

Posted by Tom Clifford VO at 5:04 AM No comments: