Sag Awards pave the way for Oscars and Will Smith 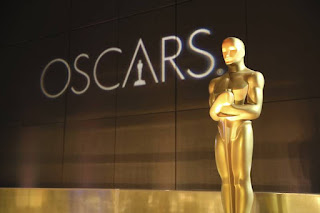 We left off last month with the post script of the Screen Actors Guild Awards about to take place on Sunday night February 27th. It be — the first of the guilds to give out their big prizes this season. The guilds — your Screen Actors Guild, Directors Guild, Producers Guild and your Writers Guild make particularly interesting predictors of Oscar season. The Golden Globes are chosen by some of the same voters, of which Will Smith won for Best Actor in King Richard...as well as a SAG (*Actor) statue. This might be the time to mention that Golden Globe saying: Be careful what you wish for! 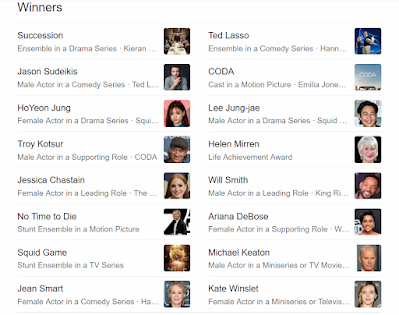 It starts to get intense the month before they broadcast the SAG Awards. The DVD squares sent through Snail mail arrive two at a time. This is in tandem to digital streaming links provided by the likes of: itunes, Disney, Netflix, Hulu, HBO and Amazon. Some days you can't remember which one was watched and its content. Early in the process, aspects of SAG performances are jotted down before early dementia sets in.

Click the fuzzy graphic above to a get a clear picture of how the SAG Awards wound up. 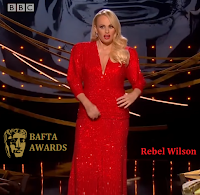 And of course there are the BAFTA Awards across the pond. It was the 75th British Academy Film Awards, also known as the BAFTAs, that were held on March 13th, 2022 at the Royal Albert Hall in London, honoring the best national and foreign films of 2021. Check out (the clip) of this year's host: the New Rebel Wilson and her take on Will Smith before...well, you know. I forgot that Will & his wife Jada Pinkett have made public - they're having an open marriage. Spoiler Alert, I see where Rebel was going with that joke.

Now the stage is set for the 94th Academy Awards with this years hosts; Amy Schumer, Regina Hall and Wanda Sykes. 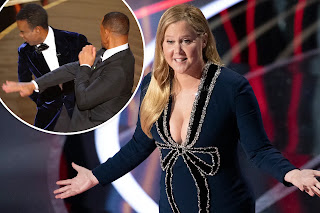 Amy Schumer, is at a loss as to why Will Smith went ballistic over Chris Rock's G.I. Jane joke aimed at Jada's shaved-head hair style. Will walked over from his ring-side table to the stage and bitch-slapped Chris in front of zillions of people. Then, from his seat afterwards, tongue bashed Chris with a couple of 'F' bombs. You see, those-in-the-know, knew that Will's wife Jada Pickett, struggles with the hair loss condition: Alopecia. Chris' joke perhaps, went below the belt for Ali to see.                Click to View   ( Sans  F - Bombs )

Was Will's slap real...or was it not? Who will tell. What has me guessing, is Will's slap and Chris' head moving so smoothly in the slaps direction. No resistance whatsoever. Almost as if the slap maneuver were rehearsed and seemingly with stunt motion follow through. Gnawing, is that tiny little Ltd. Columbo voice in my head that keeps saying: Ah, One More Thing is Still Bother'in Me Sir. It's something that's been missing all along. Calling Miss Conspiritorial-ality. But, don't you think it's sorta odd that at no time did Chris ever touch his face after the slap...not even (as it is customary with such a ferocious slug) to check to see if Will drew blood!!       Ah Haaaa!

Still, my money was on Chris for regrouping so coolly and convincingly...if he really did get Blind-Sided and Sandra Bullock was nowhere in sight. Though the Academy had their own winner. Yep, Will took home another award (Male Actor in a Leading Role) — The Big Kahuna itself — Oscar...Oscar! All with a tearful and heart-felt (except for Chris) acceptance speech.

Of course the internet was abuzz with nothing else but the memes of the S-L-A-P between Will & Chris, albeit with different Photo-Shopped heads. Check out the two Vlads havin a GO at it. 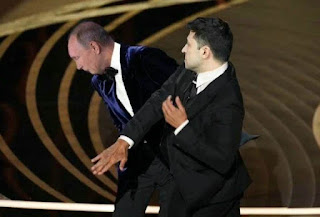 Hey, it ain't exactly Chris Rock getting his so called comeuppance, but if you want to see other famous comedians (one named Chris) battle-it-out with each other, check out a Celebrity DeathMatch I performed as Chris Tucker doin a 'Nite of the Living Dead ' number on comedian Steven Wright's G-U-T-S — back in the day.
by:+Tom Clifford, VoiceOver & Creative Services
VoiceOverGuy
IMDb Page
FaceBook Business Page
tomcliffordvo@gmail.com