Not much this month compares with the latest news-of-the-day...Carson Daly calls it quits as the host for Last Call w/Carson Daly. 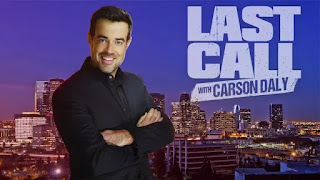 The series began as a traditional talk show but changed formats in September 2013. At that time, shortly after Daly had been named as a host of “Today,” he began filming only the segments that aired at the opening and conclusion of each episode. The interview segments were then taken over by the show’s producers.


“Last Call” first launched in 2002 and will have aired 2000 episodes upon its conclusion.
Back in the early 2000's I got a call from my agent at Abrams Artist's to do a John Kerry imitation for Carson's show here in New York, before he left for L.A. 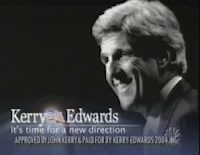 John Kerry at the time was running for president. I did a Kerry voice-over for a Post Run-for-President Tv spot. It went over a video montage of the worst crap Kerry could find on Tv. Got some nice laughs. Here's the sketch below:

Carson's team was 2nd to none with steppin up in the walk-the-talk department. Always thought that a good team is an extension of a good host. I remember asking one of the team if I might get an autographed head-shot of Carson. Sure - they fired back,  let us know your address. It's for my daughter and if he could make it out to her, that would be something else. Wham..Bam a week later Carson's head shot arrived with a cool sentiment inscribed to my daughter. We wish Carson all the very best as a home-dude with the F-A-M...and with his new digs at the Golf Channel.

This just in from Variety.com (3/14/19):
The Peacock network announced last month that “Last Call with Carson Daly” would end its run after 17 years and 2000 episodes.
Before “Last Call,” the show was titled “Later,” hosted first by Bob Costas (starting in 1988), and later by Greg Kinnear, and then Cynthia Garrett.

Lilly Singh, who first amassed fame as a YouTube star, has been tapped to replace Carson Daly as the host of NBC’s 1:35 a.m. talk show.
The re-titled “A Little Late with Lilly Singh” will launch in September, and as noted by NBC, will make her the only female to currently host a late-night talk show on one of the Big 4 networks. “A Little Late” will feature Singh conducting in-studio interviews, as well as feature pre-taped comedy sketches and other “signature elements.”

“Lilly is truly a star and we’re thrilled to welcome her to our NBC family,” said Doug Vaughan, executive vice president, special programs and late night, NBC Entertainment. “She is a multi-talented performer who will surely have a great rapport with not only all her guests but also with our devoted late-night audience. We can’t wait to get started.”
Click Here - for video of Lilly w/Jimmy Fallon & Seth Meyers:

Posted by Tom Clifford VO at 7:24 AM No comments: