Mysteries at the Museum uncovers Willig's Wager with some sleuthing from TC & Company... 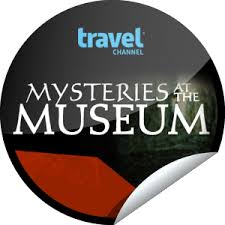 Ya'll remember a post about the Travel Channel being interested in George Willig for their Mysteries at the Museum Show. It's sort of a docu-enacted History Channel feel that revolves around an artifact of a person or persons history making.

I was approached last August about the possibility of the Show using George's 1977 climb as a vehicle for an episode featuring Don Wildman as the host. 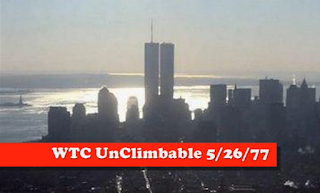 The producer had called and emailed after he had heard clips of the YouTube video "Unclimbable" . He had caught the Blog Talk Radio show Bob Brown & I did for the 40th Anniversary of the climb. He wanted to get in touch with George with the idea for the show. Depending on a few factors that can sometimes be a tall order. But as luck (and Good Timing) would have it, was able to get a good deal of interest from George, who offered some creative suggestions no less.  He said, how 'bout having the "artifact" hand off at the Explorers Club in New York... where he's a member! 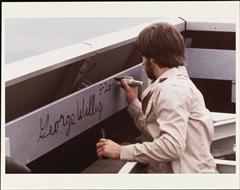 The idea behind using George's climb would be for George to donate an artifact from the climb to a museum of his choice. The Show would re-enact his feat of climbing One of the WTC Towers and offer some back-end unique tale about how it was done.

Well, just did the infamous "checkin In" call and it seems there's been a 'development'. The producer says that it's just one of those "things" that the project has been passed on and now it's with a different team. They'll do another reach-out if anything should develop. But, not to be one to ignore an opportunity, I asked the the producer if he and the team might be receptive to having some samples of my vo work, since all the teams DO actually talk to each other from time-to-time. Sent 'em a series of links to voice demos and hope for some interest.

But wait! Stop the presses! Due to a few glitches and an admiration for the Mysteries at the Museum show and concept, we just received news that MM had its YouTube release of the episode featuring George Willig's historic climb. Watch the entire show episode at this link: The Great Panjandrum and More. Pictured right is the actor portraying George in the April 6th episode segment called: Willig's Wager.

We couldn't be happier as well as the list of actors, story-tellers and production people - to retell George's saga. It was shear happenstance that a BLOG reader had informed us of seeing the episode back in early April. We did our due diligence tracking down where we could find the episode online and had two choices: itunes & YouTube. And please remember these two channels impose fees for the privilege of viewing the editions after air. But, we were eager to see how they pieced things together. Of course it would've been of benefit to know when the episode was airing. Just for the social media blitz and 'Premier' party alone. But, Mysteries at the Museum unfolds in great detail and with realistic production values the when, where and how's of that day. We're working on getting a quick clip to convey the pacing, the landscape and a time that was much different than it is today.

Posted by Tom Clifford VO at 11:22 AM No comments: