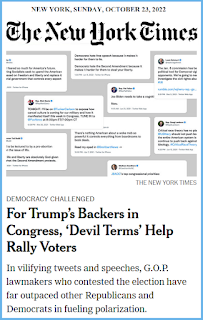 Tis the time to get spooked, right? Man, did I ever, after I looked at Sunday's front page of the New York Times. On the front page was a montage of nine Tweet Balloon quotes from Republican representatives over the past couple of years. One of which was from a fellow I did a VO job for back in 2010...and I ain't saying who!

That being said; the scary aspect and perhaps another plus for ai, is that one can never tell where one's voice is gonna wind up...or w-h-e-n! The voice I used was far from my own. It was a nice homey storyteller type voice - codger with a hint of southern drawl.

The spot was nice by any time or party standards. No pokin fun at anyone or any one demographic. The spot featured a young guy just starting out, not a career politician. The VO moseys on over to where he's been a small businessman and found out how to create jobs and grow the economy. Plus, I got to learn how to say Mont-gum-ree. And it's State House as opposed to congressman or representative. 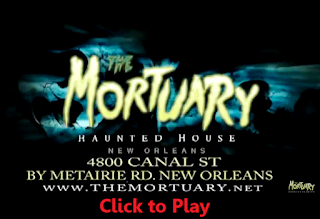 The Creepy-Guy voice wraps up the Halloween Season. This makes three posts in-a-row with the Haunt Industry as the topic or sub-topic, but being it's right at the crest of the season, why not make the best of mentioning it. The Mortuary, the Haunted House venue in NOLA, is running this very cool TV spot of these two goofy characters On-The-Street  being interviewed. They're pretty funny as they give their accounts at the event. Spoiler Alert - pop-out voice.

Now that it's closer to October 31st, here's the Mortuary Sprite co-op spot (left) that lets viewers get discount tickets by scanning the secret QR code where Sprite is sold...time is running out. Click the Sprite 'House that Fear Built' pic to play spot in typical high-energy Creepy-Guy voice style. 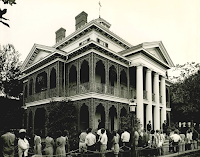 Don't forget, it's The Mortuary's 150th anniversary. In 1872 this Grand Victorian Mansion and former funeral parlor opened its doors. Between 1930 and 2003 more than twenty thousand funerals took place in this house. The Mortuary first opened its doors in 2007 as a haunted attraction and we've been partnering-it-up now for 15 years. Take a listen to the Celeb Voices mp3 from the August 31st Blog post above. It contains a few oldie-but-goodie horror voices joining unworldly forces to perform an audio translation of the text.
Here's a little Halloween ditty (below) that first found its way to us on the internet as a graphic. "Clifford the-Big-Red-Dog at Halloween" appeared from somewhere and we figured why not throw together a little video of it with the voice of Christopher Walken AKA Clifftopher Walken doing Kevin Spacey's rendition of Christopher Walken doing the Trick or Treat incantation.