Life in the Pandemic Age 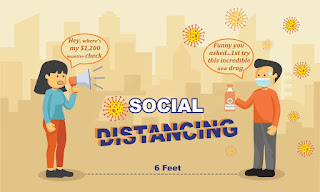 No matter what side of the Isle you're on...you gotta admit that things seem to have gotten outta hand when just 42 days into the Covid-19 Virus Pandemic (March 11th), the call goes out (April23rd) to inject disinfectant into our veins to set us free!
Hey Lady...How'd you'd like to make $1,200.00 the hard way.

New York has been officially on "Pause" Lock-Down since March 22nd. It feels longer than that since feeling awkward to be in large crowds...all the way back to March 1st when attending the Broadway play "Come from Away".

Come to think of it, there's a correlation with the plays story-line and today's Stay-at-Home order. We were all conscious of risk if there was something floatin' around. But no one was really sure of what. One thing's for sure, traffic was not normal. Bing, bang boom from How-am-I-doing to 47th, but missed the turn off to 45th Street. Normally, a Big-Ass mistake. But, not that night. Did complete circle around straight into the parking lot a few doors down from the Gerald Schoenfeld Theatre and was still 10 minutes early.

To think about it now (well into Pandem'onium) we musta been crazy to have attended that night. Crazier still to have purchased a $27.00 cup of wine. It wasn't enough that there were millions of those "Outbreak" drop-lets swirling around us, but were paying dearly for the privilege of getting additional contagion from the cup! Turned out to be a great play and got home in an hour. Then, almost overnight it seemed, came the ratcheting into government hyper-response mandates. The play shut down not long after with all the others in response to the State-Ordered theater closures.

Business as usual is pretty much at a stand still. At this point, old business had been thoroughly acquainted with all the options to voice current & updated notices. Some, thankfully have acted on some of those options. New business by and large, just ain't answering the door as much as they used to. Go figure. All that's left it seems is to make it up. Still workin on that. At present 30 + million workers have filed for unemployment insurance benefits as well as a host of other socialized safety nets gone out to stabilize industry & the work force. There's been talk of a magic bullet vaccine of sorts from a firm called, Moderna Therapeutics. The stock market has reacted favorably to that perception. Fragmented states have started to partially reopen on their governors orders.

But, tests seem to be the prevailing sentiment for data driven re-openings in certain states. Here in New York, which has businesses ground to a halt, also has schools closed for the rest of the school year. With the lock-down slated to end soon on May 15th, this could be the beginning of the 2nd phase of the 'Pause' program and begin to partially reopen parts of New York state. Yet, not 100% sure of dates vs. tests and tests that have all the parts to them to actually tally results. Upstate will go first, with downstate being "more complicated" so says Andy Cuomo, Governor of NY.

More to come...as it develops.

As a way to keep busy and recognize Bernie Sanders' contribution to the fight, we put together a little satire called: My Friend Andy... as in New York Governor Andrew Cuomo's daily COVID-19 Briefings. Borrowing from the Shawshank Redemption theme, we gave Sen. Sanders a heartfelt tribute, complete with graphics and Morgan Freeman Sound-A-Like voice-over. Put it up to be in sync with Bernie's 4/8/20 announcement to discontinue his run for president: Click to Play below