In another life I was doing some talent booking...Usually of the Celebrity kind.

It was back when I was with Marty Ingels of Ingels Inc. I was his east coast agent and developed a rapport with ad agencies, making my bones as it were.

My friend and still viable talk show guest George Willig (WTC climber 5/26/77), had an interest to do the David Letterman Show. It was a morning show back in the 1980's. With the know-how from Ingels, I had piqued the interests of David's talent coordinator enough that she called in late August to say they wanted George on the show in mid-September. It would mark David's 65th show ending a 13 week cycle. 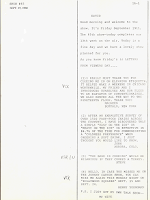 If you can believe it, George was actually canceled for that show while he was still in the air from California to New York a few days before broadcast. That's a whole 'nother story. And we convinced their talent coordinator to continue with George as planned.

The show started at 10:00 AM and we arrived at the studio at 7:00 AM for rehearsals and timings. What they had originally planned for the shows opener was to have David climb up a 45 degree angle and introduce George's guest spot.

Yet, after a few rehearsal takes, it was still sorta flat. I was spit-balling a few ideas with the scenic designer that if you could get your hands on some big-ass background scenes of a brick building...Sure she said, we're NBC. We got that stuff layin around all over. WoW, great. Why not place George & Dave on top of it on the floor. Use a SFX of street noises, coupled with some fans blasting away to resemble swirling wind, place a camera over-head to take in the effect that they're scaling the side of a building. The ruse was pretty darn good. And these guys are pro's. Watch as they play it up until Stan, David's dog, comes over to reveal that the GiG is up! The scenic designer loved it. Hey, what's not to love, it turned out to be a great bit. The early Batman show used a facsimile of it every week to introduce cameo celebs. And I learned early on that it's always about what's best for the show...and No gloating allowed. Click for the show's opener:  David Letterman Show opener with George Willig