As I'm listening to WNYC the NPR affiliate in New York, this morning, it was announced that one of their alum, Oscar Brand has passed away at age 96, on Friday 9/30/16. WNYC, will be doing special tributes to him throughout the day. Mr Brand has had a show (Folk Song Festival) on NPR as far back as 1945.
He also maintains honors from the Guinness Book of World Records for having the world's longest-running radio show with the same host.

As a matter of fact, when Oscar started his shows, announcers always introduced him as "WNYC's shoeless troubadour." It's rumored that Sesame Street's Oscar the Grouch was named after him! Take that Bert & Ernie who owe their namesakes to characters in "It's A Wonderful Life"! 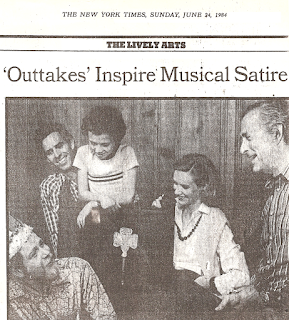 I had the pleasure of meeting & working with Mr. Brand in the early eighties.
Oscar had authored a little known play, Fun & Games, that was inspired from 'outtakes' from "How to Steal an Election" which was sub-titled "A Dirty Politics Musical" with score & music by Oscar Brand. To the right, is a pic from the article about the play, its author and cast, that appeared in the Sunday New York Times on June 24th, 1984. That's bearded Dave Van Ronk, the folk legend (pictured left) with Oscar Brand (on the right).

I had the good fortune to be cast In Fun & Games as political voice for such politicians as: FDR, Eisenhower, Kennedy, Nixon, Reagan and Lincoln. This was a script-in-hand showcase production and received full Equity code support. Click for Show's 'Exit Chorus'

It just happens that Fun & Games...is a smart and timely story about a political campaign manager (the Fallen Angel - Dave Van Ronk) who has been steadily degrading the political process for two centuries. For the latest election he tries much of the same but with (2) of the worst possible candidate choices in election history (I sh-- you not). Well, the voters revolt and send Dave back to heaven with instructions to bring back Abe Lincoln. These days there'd be little resistance to maybe having Mary come down.

There's 17 musical numbers that were performed. A revisit of some 32 years later doesn't hurt the charm of this neat little yarn. Very proud to have had the pleasure of performing with other talented actors & singers and be able to work with some of music's legacy's. 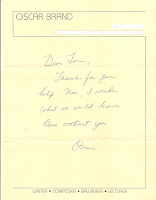 As an extra treat, Oscar had sent a quick note of appreciation to me and had called about another show he and his company was staging. He was constantly on my case to stop smoking. I think he'd be glad to know that I did...many times since then...as Reagan, Bush, Gore, Perot, Clinton and Trump. 1984 had quite a few similarities with today's line up of candidates. The Republicans had Reagan & Bush. And the Dems had Walter Mondale and Geraldine Ferraro (as the 1st woman VP running mate).

Here's a bit of info on Dave. David Kenneth Ritz "Dave" Van Ronk was an American folk singer. An important figure in the American folk music revival and New York City's Greenwich Village scene in the 1960s, he was nicknamed the "Mayor of MacDougal Street".