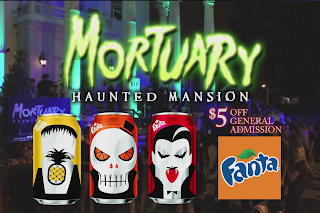 That time of year again for the Scary-Voice. This time, it's down southern way for The Mortuary. Where they again have put that signature Scary-Voice to good use for their 10th year Anniversary and Coca~Cola's Fanta tie-in campaign.

The Mortuary Haunted Mansion in New Orleans, Louisiana has been the fright venue for many creepy experiences; The Paraplex, Cirque De Fear, Zombie Outbreak, The Mystere Escape Rooms, Se7en Deadly Sins and is by far one-of-the-most thrill packed haunt venues in the country. Now, they're pullin out all the stops with their 10th year anniversary Tv campaign. Taken all in good fun, there's lots of room to go over the top to the point of the ridiculous...and audiences sometimes don't know whether to s-c-r-e-a-m or laugh their heads off. But, watch out...or it could catch you off guard!                           Click to Play Spot