Well, it seems we all deserve a VaCa every now and then and with the help of a friend who knew the lay-of-the-land so-to-speak, we had the pleasure of being steered in the direction of Lake George for a few Original Vacation days. Ain't the closest lake around from Nassau County, Long Island. Four hours of scenic driving through the Connecticut hills and back up amongst the Adirondack mountain ranges. Nice family oriented setting with generations of happy campers enjoying all that nature and the fine folks of Lake George had to offer. 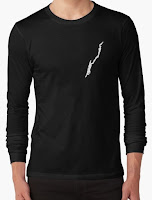 The lake is very big (32 miles x 3 miles). I even got the T-shirt that looks like it's got a stain with those dimensions as it resembles a draggle of bird poop on the left side of it. But, at least now I can say (as it seemed I was the only one left in the world who could) been there..done that...got the T-shirt.

Cutting to the chase and all, there was an off day where it rained for a few hours, whereby our travel itinerary director thought it useful to find something for us to do for those few hours. That something was something none of us had figured on... at least not in these parts.

Since we're so close to Glens Falls, it was put forward that we take in a rather unexpected art show...of the Hyde Collection. History has it that the fortune made from a paper mill magnate and their daughter and son-in-law's taste for high art of Original Masters manifested into this landmark museum. Which until that very moment for us, was a tightly kept secret. When we went to Lake George, we in no way expected to see an original Rembrandt, van Gogh, El Greco, Ruebens, Whistler, Kandinsky, Picasso, Renoir, Degas and last time we saw a Botticelli was at the Gallerie degli Uffizi Museum Gallery in Florence, Italy. The list goes on to include works by; Sir Anthony Van Dyke, Dorothy Dehner, Winslow Homer, Edward Hopper, Thomas Eakins, Andy Warhol, French post impressionist Georges Pierre Seurat, sculpture by Andrea della Robbia among others for what amounted to a well rounded tour of world renowned artists.

The museum was designed by Boston architect, Henry Forbes Bigelow in the style of an Italian renaissance palazzo. The Hyde's passion for collecting art was shaped by world travel. 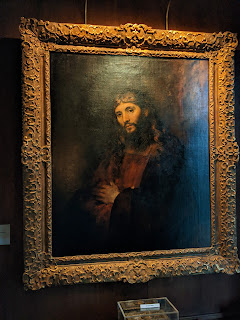 But NYC was where they acquired the majority of the art works that entered their collection. To the left is a Rembrandt van Rijn of Christ with Arms Folded cica, 1659. These works are viewed up close and personal aside from it appearing a bit out-of-place with the congruity of the Adirondacks. There are just a few visible security guards standing about here and there and couldn't help but think what might happen to a priceless piece if any attempts were made to abscond with or vandalize them.

A few days after our visit to the Hyde Collection, a story unfolded about just that scenario in Italy. On July 22nd, one of the most famous paintings in the Gallerie degli Uffizi in Florence, Sandro Botticelli's Primavera (around 1480), was left undamaged after climate activists glued themselves to the masterpiece's glass covering the work.

It took 20 minutes to clean following the glue incident. “If there had not been the special protection glass—something that museum management put in place with all major masterpieces a few years ago—then the work would have been badly damaged.”

The protestors also rolled out a banner which read: “Last Generation: No Gas, No Coal.”

A new gallery devoted to Modern and Contemporary art, aptly named the Feibes & Schmitt Gallery, opened in June 2017, positioning the Hyde Museum as a regional hub for post-war art. For more than four decades, Werner Feibes and the late James Schmitt amassed a world-class art collection that aligned with their personal tastes and interest in non-objective art, Pop art, abstract art, and Minimalism. On display now is modern exhibition with sculptures in - The Art of John Van Alstine’s Transformations: slated to be at the Hyde till September 18th, 2022. As we turned the corner of the Van Alstine's initial sculpture displays we were stopped in our tracks with a piece that was inspired by a contemporary of George Willig, the climber of the South Tower of the World Trade Center in May of 1977.

Funabulist, was the sculptures title. Abstract as this miniaturized version (left) of the actual sculpture was, you can't help but be struck by its balance centricity. The year was 1974, August 7th and the twin World Trade Towers were brand spanking new. (And according to legend and eyewitnesses, had the calmest wind turbulence between the Towers ever).

On that day a 24 year old French tight-rope aerialist name Phillipe Petit had a calling to cast a suspended high-wire 200 feet between both the World Trade towers and walked, knelt, laid across and danced on it for nearly an hour...1350 feet (a 1/4 of a mile) in the sky from what is now known as ground Zero.

Funabulist was John Van Alstine’s tribute to Phillipe and that (Life or Death) feat of balance. There's even been a documentary made of it starring Joseph Gordon-Levitt called Man-on-a-Wire. This film incorporates Petit's footage to show the numerous extraordinary challenges he faced in completing the artistic crime of the century. We took a shot of the placard on the right and sent it over to George with the tag "we gotta get you one of these" to see if he too might have a depiction of his WTC climb in pigmented and sealed steel someday.

click to visit John Van Alstine’s website
Oh...and speaking of attacks; Howz 'bout some July 4th sentiments - CelebDeath style (we play Teddy & the wheel-chair dude in video below). Also, here's a link to: T'was the Nite before Xmas (page-Bottom) so's to do that 'Xmas in July' thing...with all the trimmings
for what could be a great excuse to P-A-R-T-Y out, man.
by:+Tom Clifford, VoiceOver & Creative Services
VoiceOverGuy.tv
IMDb Page
FaceBook Business Page
tomcliffordvo@gmail.com