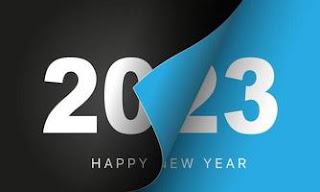 Looking back, 2022 was a pretty good year in many respects. I made a friend some money (sorta out of thin air...really thin, 45 years old thin), celebrated some milestones and it wasn't too shabinsky with the voice-overs either.

But, was 2022 a banner year? Wiktionary has it as; It was a banner year for the company; it produced a million widgets for the first time. Perhaps, it could be more than just a million or so widgets? Maybe 2022 never really had a chance to establish its own identity to have a banner year because, you know, it never had it's own - Catch-Phrase. Whereas, 2023 comes with its own Catch-Phrase built right in. Nice segue, huh.
Besides, things right now are starting to look a little sketchy. Markets are diving for cover every other day. Interest rates are trying to plug things up and Joe's tellin people to "F" off about how he knew one of the guys on Mt. Rushmore. So, since 2023 already seems to have something going for it in the Catch-Phrase department, why not take it out for a spin. We're talking a phrase that's over a hundred years old and shrouded in analogue Black & White. Could "23 Skidoo" be ready for a come-back!

During the early 1900s, groups of men reportedly gathered on 23rd Street to watch women walking by have their skirts blown up, revealing legs, which were seldom seen publicly at that time. Local constables and transit police, where known to periodically disperse the group's congestion with hearty bellows of  "23 Skidoo...C'mon, let's Go, 23-Skidoo, let's move it along now". It was said that they were;  "Giving them the 23 Skidoo".

Perhaps, the most widely known story of the origin of the expression concerns the area around the triangular-shaped Flatiron Building at Madison Square in New York City. The building is located on 23rd Street at the intersection of Fifth Avenue and Broadway, the latter two of which intersect at an acute angle. Because of the shape of the building, winds swirl around it. "23 skidoo" quickly became a popular Catch-Phrase after its appearance in early 1906. It combines two earlier expressions. '23' (1899) and 'Skidoo' (1901), both of which refer to leaving, being kicked out or end of something.
So, maybe "23-Skidoo" ain't such a bad Catch-Phrase for 2023. An anthem to Let's go...Let's move it along. Time to go past the teenage years and realize that this millennium is gonna be a quarter century old soon, be'Geezus!
Below are some voice-over highlights from the 2022 Calendar year. Please take a look & listen.

The copy says it best; Go from design to industrial parts at the touch of Print! They didn't want a traditional voice or attitude insomuch that their printers were certainly not traditional. The production director initially contacted us in hopes of using the same tone of narrative voice we used in the Terminal Bar years back. We started the year off with a voice-over for their C3-D Metal printers.

April we did the video voice-over for Za’atar Road. What we tried to convey in the voice-over was the emotional aspect of the Levantine region and it's artisans, descendants, expatriates and enthusiasts with providing people around the world with access to the regions authentic goods they can't find locally. Check out their website as an alternate source.

Back in November, 2021 while watching CNN’s Original Series “The Story of Late Night" on HBO Max we noticed a clip of someone we know on a show that we booked them on, that featured a premise we cooked up...some 40 years ago! The clip featured George Willig (WTC climber) with reference to Morgan Brittany, the actress. We just saw her in a Perry Mason (movie) re-run from the 80's & 90's.

The MetaVerse stands more-than-ready to remind us of names, places and generally whom we and "our eyeballs" were a few months or years ago as we pass through the landscape of our lives. Boehringer Ingelheim's was to tap into this fountain by rolling out of their digitally transformed journey promo. The pacing's a bit enthusiastic towards the end to help build momentum and inspiration within the troops.

This year marks the 15 anniversary (Circa 2007) featuring the Creepy-Guy voice so we've combined the best creeps from the bunch and put 'em on the below link. Oddly enough, this year also marks the 150 year anniversary of The Mortuary in NOLA. We began our journey thanks to a mutual acquaintance at Elswarro Productions. The Creepy-Guy voice became such an identifiable presence with The Mortuary, that they started using us directly and it became the beginning of a beautiful friendship ever since. Click to hear a few quick tags for the Mortuary's  'The House that Fear Built' 150 year Anniversary campaign.

And, "in keep'in with the situation" as Mrs. Dilber would say at A Christmas Carol time, we leave a link to a minute version of:  'Twas the Nite Before Christmas - a cavalcade of wise-crackin old Celeb farts voices that will thrill and captivate the whole family. Click above link or graphic to play. 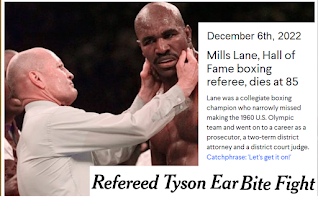 In closing, we end the year by giving tribute to the inimitable Mills (Let's Get It On) Lane, who passed away this December 6th, at 85.  Let's hope he's still gettin' it on in that heavenly ring in the sky. Mills was a real life boxing referee. His long career was punctuated when he ref 'd the Tyson/Holyfield fight. That's when Mike Tyson bit off a portion of Holyfield's e-a-r! In 1998, Lane hit the small screen as the star of the syndicated courtroom show Judge Mills Lane, deciding real-life cases with his razor-sharp judicial expertise and hard-nosed demeanor. He also appeared as himself in the MTV animated series Celebrity Death-Match where I often times appeared with him as a celebrity voice. The Mil'ster and I go way back. Yeah, right. Actually, Mr. Lane and I, although appearing together in many of the episodes, only met twice at the food court of Syn-Sound recording studio on the upper West-Side of Manhattan. Here's an episode that features Mills out of character as a contestant, almost. I played tough guy VJ Matt Pinfield against Zany VJ Jesse Camp. It's not pretty, but you can count on a-laugh-a-minute of side-splitting humor for an uproarious riot of comedy fun.